‘’There isn’t any way on earth I’d pay more than a buck for one piece of a sinker. No way!’’

This is one of the lines we picked from a heated online conversation on Lead vs. Tungsten weights. I wasn’t shocked as it is an argument I hear often.

Forget the parliamentary debates you watch on TV. Anglers too debate on so many topics and this is one of them that has left so many informed. Let’s clear the air and help you understand the differences between lead vs tungsten weights.

First, each works effectively when used correctly and in its correct place. This is a detailed description of the two but not a contest where we’ll choose a winner. It should help you make a solid decision on what to choose.

There are numerous advantages to each weight but the primary difference is the size-tungsten weights are smaller than lead weights. Let’s delve further into the details. 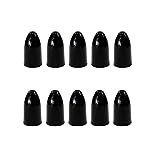 The Main Differences between Lead vs Tungsten Weights for Fishing

We are all bothered about how much we’ll cash out on angling gear whether it is on a weight or a kayak. So the price has been among the major aspects that differentiate tungsten from lead weights. That aside since it comes later after functional and craftsmanship differences.

Here, we outline and briefly explain the differentiating factors to help you be informed and know what to choose.

The size makes one of the primary differences between the two. The size of tungsten weights compared to lead weights is quite smaller. It might not be obviously noticed in lower ounces like 3.8oz.

However, if you are beginning to scale up to the higher ranges like 1 ounce and above. A one-ounce lead weight compared to a one-ounce tungsten weight, size will be closer to half the lead size.

If you want a small finesse presentation, small size of a tungsten weight will be ideal. Waters with heavy pressure force anglers to resort to small lines and lures. Tungsten will shine in such a scenario. If you can find a smaller tungsten shaky head weight, it will be a win.

What makes tungsten weights much smaller compared to lead weights? It isn’t the manufacturer’s choice! Tungsten is denser and harder than its lead counterpart. Having this hardness in tungsten weights will allow for more sensitivity over rock ledges and structures.

When fishing, you want the best sensitivity you need and feel it with the rod tip. Bass anglers will agree to this as these guys are finicky and love to nibble. They hardly strike. With a slight increase in sensitivity, you’ll feel every subtle bite.

If you throw your tungsten weights in murky and dirtier water that has no visibility, as you drag it in the bottom, you will feel it in your rod as it runs through dirt or sand. If you reach a rock pile or a stick stump, you’ll feel a major difference when using lead weights.

With tungsten weights, it is easy to feel even the tiniest pebbles, and any changes in the structure you are dragging the weight over.

One factor that most conscious anglers consider is toxicity. Unlike lead, tungsten is non-toxic. This means the former is harmful to the environment when you pour, inhale, or ingest it. For instance, if you are fishing with lead weights like most anglers do and the line breaks, that is the beginning of disaster.

The lead can’t be retrieved and remains in the water as it fuels toxins. Fish will inhale it and will certainly be bad news. Yes, we have been fishing lead weights forever but that is what they can do.

Fishing is about conservation and most people loathe lead in water. Using tungsten weights doesn’t leave any toxins or harm the environment.

Tungsten weights are tough and will keep the strength throughout. This means it will retain its shape longer even if you keep flipping the weights under docks or thrashing as many into rocks. Lead can’t take this abuse and will morph into all odd shapes or even dent. With time, this ruins your weights.

You will need to keep replacing them often. If the end of your weight is pinched shut because of banging in boxes, they aren’t usable. If a harder option exists, why not invest once and for all and save the cost of frequent buys of cheap weights prone to damage?

You might be wondering why sound is a factor here. Yes, most fish get spooked by some sounds and become difficult to catch. For instance, sounds from boats with loud motors can scare trout.

Sometimes, sound becomes the desired attractant. Weights make click sounds that aid bass and other species to get hooked to your lure. There is a difference in the sounds made by tungsten and lead.

Lead is softer and less dense. This means that it creates a duller sound when the weight hits on something. However, how loud the sound will be will depend on how hard the lead weight hits.

Tungsten is harder and will hit on surfaces with a high pitch sound. You will hear a different higher clicking sound. Most often, this difference will be a determinant of getting a bite.

If you are around anglers using lead weights and you choose to click rocks using tungsten strikes, you might land the biggest bites first.

Money! The budget is always a determinant for most fishermen/women when shopping for weights. The majority would opt for lead because it is cheaper. What makes the price of tungsten weights higher is its availability.

While any start-up company can manufacture lead weights, not all of them can work on tungsten. Tungsten requires a temperature of 6,192 degrees F to burn. It needs high-grade equipment, a warehouse, and a pack of guys to help with pouring the weights.

Lead vs Tungsten Weights – Which is More Sustainable?

At some point, lead was banned because of its environmental impact. During the ban period, substitute metals were used. Tungsten was identified as being harder and heavier than lead hence its popularity

If your weight will have a sharp edge, the hardness might cause line fraying. Some states still have the lead ban active while it was lifted in other states.

We remind you to check the regulations of your state if you are still using lead weights. Also, if you are planning for a fishing trip outside your residence, it will be thoughtful to confirm if the areas you intend to comb allow for their use. You wouldn’t want to be fined or jailed for this.

Lead fishing weights like earlier said are harmful to the environment. If left in any water body can be hazardous. The threat might not be as much against humans or fisheries. The primary concern is waterfowl.

Ducks, swans, and other waterfowls will consume smaller lead pieces. They love to peck and eat tiny yet hard objects such as seeds to help in their digestion.

Unfortunately, as lead pieces disintegrate, it penetrates the bloodstream leading to lead poisoning. In the north USA, the population of loon has been greatly affected by this issue.

This doesn’t mean that you can comfortably fish lead weights in areas without waterfowls. Lead could still have unknown effects. Better play safe than sorry.

Should this prompt you to switch to tungsten already? If you can, the better! If the financial aspect hinders you at the moment but you still want to adventure in the waters, be mindful and avoid discarding lead sinkers and weights into the water.

As a fisherman/woman, you are supposed to be a conservationist. If you spot any lead sinkers and weights on the shores or banks, pick them and properly dispose them. Tungsten weights are costlier and if you are shopping on a tighter budget, it isn’t vital. However, if you can cash out more, this will be an asset-durable for prolonged use and safer for the environment.

Tungsten weights will give you a greater advantage when feeling bottom surfaces among other benefits. The difference brought by tungsten sinkers can highly influence that buddy to bite. Aspects like fall rate and sound can get them to strike. You can save some more and give tungsten weights a try.

Lead weights are the commonest because of their low price and high availability. They are toxic to the environment and not sustainable but are a consideration for most anglers. Even if you use them, be careful not to intentionally leave them in water.